Important note: when analyzing a signature alone, it’s important to remember that we are seeing only a small part of the whole picture. Compare it to looking at a photo of someone’s nose and trying to describe their whole face. You get some information, but not the context, which tells far more.

Apologies for the quality of some samples, which I found through Google Images. With that caveat, and politics aside, in alphabetical order, here are my very limited brief impressions (not intended to be viewed as a complete analysis) of the signatures and, where available, handwriting of most of the 2016 candidates: 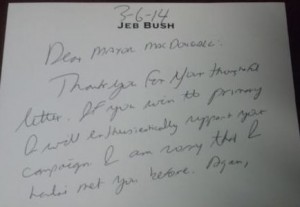 Jeb Bush: His handwriting has an easygoing quality that suggests one who prefers to take the path of least resistance whenever possible. He would rather switch than fight. Jeb is not a typical leader, but may be more comfortable working within a strong support system.

Maybe he was tired or discouraged when he wrote this note, but there’s not a lot of dynamic energy in it. He’s good at jumping quickly from one idea to another, but it’s important for him to have a good administrative assistant to handle the details and get stuff done. 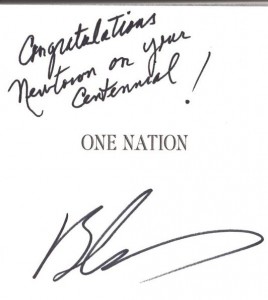 Ben Carson: This kind of signature is illegible and lacking complexity. People choose to sign this way for various reasons. Sometimes it’s a high need for privacy, sometimes it’s because they have something to hide. Or maybe they’re just in a hurry. We’d need more writing to know the full truth. The capital letters are overemphasized, showing a great deal of pride in his accomplishments. Yet, he ends it on a leftward stroke, which is akin to extending one’s hand, then pulling it back at the last moment. His handwriting is conventional and conservative–no surprise there. He likes to fit in.

Hillary Clinton: Her signature is clear and simple, she has nothing to hide. The capital letters are tall and in proportion to the rest of the writing. The handwriting is simplified with a slight right slant, so she is a quick thinker, but she listens to the facts before making a decision. She is flexible, sometimes too much so, and can make quick changes of direction when necessary–she’s good at adapting to situations as they develop. It’s not easy for her to let others get close, but the handwriting has the softness of compassion. Click here for more in-depth comments on her writing, as well as Donald Trump’s.

Ted Cruz: None of the letters in his signature look like what they are intended to represent. The T looks like a Z, there’s no telling what the other letters are if you don’t already know. The last name looks like a capital G. When someone makes their name entirely illegible, there is much going on behind the scenes that he doesn’t want others to know about. Letters that look like other letters are a primary sign of misdirection. Cruz is quick to switch gears and he rearranges the way he thinks with great facility. Situational ethics allow him to take whatever side of an argument seems expedient. The letters in his block capital printing change size frequently, which suggests that his temperament is more uneven than he would like others to know.

Carly Fiorina: The very large capitals show her need to reach up and attain something big. The final stroke on the “a” curves back and covers over much of the word while pointing at it. So on one hand she’s saying “look at me,” but on the other, she’d rather you didn’t look too closely. Her name is fairly clear and the i is round and dotted close to the stem, which reveal a perfectionist who is interested in the nitpicky details. The form of the “r” in her first name looks like a shark’s tooth, which is often seen in the handwritings of people who know how to manipulate their way into getting what they want through whatever means are necessary.. 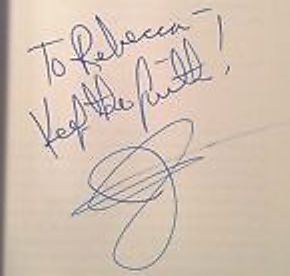 (upper zone letters include b, h, l, k), which are present in several of the candidates’ handwritings. The context tells us the meaning.  Such tall letters are adopted by one who feels most comfortable when he knows what the rules are and can be sure they will be enforced. They are often used by people (mostly men) who have a strong belief in God and they work hard to live up to high principles. It’s hard for them to understand someone who steps out of bounds (even when he bends the rules himself). Here, the upper loops are very wide, which tell us that he has an open mind and is at least willing to listen and explore ideas that are beyond what he already knows. The signature is illegible and crossed through, which has a strong element of self-protectiveness. 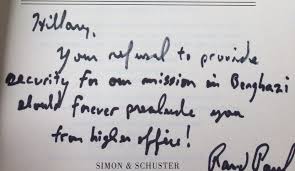 Rand Paul: The capital letters in his signature reach for the sky. He is an ideologue with poetic leanings and an abiding interest in the theoretical (see the very tall upper loops). He has a tendency to compartmentalize, focusing closely on the fine details, sometimes missing the bigger picture. A strong need to live up to his father’s high expectations means that he is unlikely to deviate from the beliefs that were inculcated him as a child. Yet, his self-image and level of confidence is far less than he would like to project.

Marco Rubio: His “signature” consists simply of very prominent initials that hide almost everything about him. Plus, the closed hook at the beginning of the M, jealously guards his secrets. The M in his first name is much broader than the R in his second. Wanting to present himself as strong and significant, he’s far more interested in projecting who he has become than where he came from. He’s quite insecure.

Bernie Sanders: the  handwriting is quite compact with little space between the words, which shows his strong need to connect and interact with other people. He’s very emotional and reacts quickly. He has a lot to say, has high ideals. Some might call him argumentative, but he sees it as simply getting his point across. That is, once he accepts an idea, he will not easily let go. There’s plenty of dynamic energy in this writing. He has strong values that he is unwilling to compromise (see the tall upper loops). While he is able to make adjustments when he needs to, he will make sure to get where he wants to go. 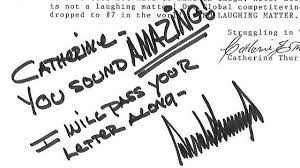 Donald Trump: his signature is very different from the rest of his writing, so what you see is not necessarily what you get. The signature, which resembles barbed wire, is extremely aggressive and reminds me of the signature of Heinrich Himmler, Hitler’s right-hand man. The block printed

handwriting is done using a broad tip felt pen, which produces a heavy appearance without putting a lot of energy into it. There is a great deal of energy in the signature, but it is held back because he’s not someone who easily gives. There is a lack of flexibility. He prefers to have everyone else to adjust to him. Click here for more in-depth comments on his writing, as well as Hillary Clinton’s.